A few years ago, some people believed that comments left on news stories and in online discussion groups could influence public opinion.

As it turns out, no one took any advice about anything from some person called newfiesexgod27.

Some evidence of the impact that online polls and comments don’t have on public opinion can be found in a simple chart the always annoying labradore posted a couple of days ago.  He toted up the number of votes in the VOCM Question of the Day and worked out the average and the mean.

Here’s what he got. 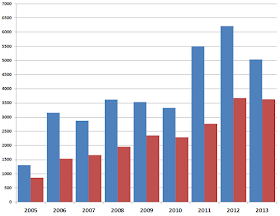 The highest numbers are within the past three years.

Now look at the public opinion polls.  Here’s the one taken by MQO each month during 2012, the year of the biggest numbers on that chart.

In case you can’t make that out, it shows the Conservatives hit their lowest polling in a decade in 2012.

Lowest score in a real poll.

Best you can say is that the online crap Paul Lane and his pals have been getting on with had no effect on public support for the Conservatives.

The Conservatives need to change what they are doing.  They have known this for at least four years on the economic front and after a couple of years of chronically crappy polling on the political side.

They keep doing the same thing despite – as you can see here – mounds of evidence that more of the same is not a good idea.