Husky Energy announced on Monday an update to its drilling program related to the White Rose production project.

That isn’t what the cbc.ca/nl online story says, by the way.

In any event, you can see both wells marked on this close-up of a map produced by the offshore regulatory board. 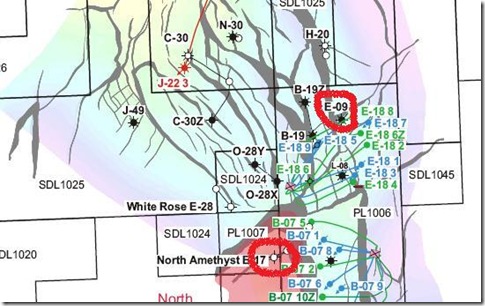 Now it is interesting to note that the legend for this map shows something rather odd when you match it up with the news release. 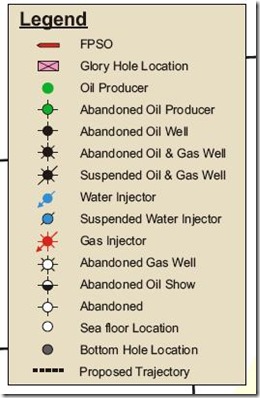 According to the legend – and if your humble e-scribbler is interpreting this correctly - North Amethyst E-17 is marked as an abandoned well using a symbol that appears to represent a dry hole.

E-09 is marked as an abandoned well with oil and gas showing.

Plus, these two wells appear to be part of different structures:  North Amethyst and Hibernia Formation.

That’s something for your humble e-scribbler to follow up on with the offshore board for clarification.

If you look at the release again, though, it doesn’t actually appear to add any new information to what has been announced previously.

In early 2008, North Amethyst was said to hold about 70 million barrels of proven, probably and possible reserves.  That was based on delineation from 2006.

Now that isn’t the specific result from well E-17;  that was the result for the entire North Amethyst structure that is part of the satellite development. E-17 is actually quite far north of the glory hole for North Amethyst.

So does the announcement on 23 November show  more oil or is it the same oil as before just described differently?  Good question.

It might be instructive to look at the fine print at the bottom of the release:

Now this doesn’t mean the White Rose project and the extensions are not occurring.  Rather, there might just be some confusion in media reports about what this announcement means.