On major areas the Conservatives continued their policy of spending more than the provincial treasury can afford.  That’s been their trade-mark since 2003 and it became etched in stone in 2009.

As SRBP forecast a couple of weeks ago, the Conservatives raised a modest amount of money through a two percent hike in the provincial sales tax and a variety of small fees.  They added some new tax brackets at the upper end of the income scale.  The small twist in that one came from the actual release of the proposal by Memorial University’s economics department.  They recommend an improved rebate scheme to transfer the additional tax revenue to lower income residents.

Other than that, the Conservatives borrowed heavily. The deficit is a record for any government since Confederation. Your humble e-scribbler knew it would be bad.  It was worse than imagined.  That’s because – contrary to the forecast – they didn’t reduce capital works spending.

Lots of people are focused on the tax increases.  They amount to slightly more than than 10% of the total deficit. In the bigger scheme of things it is nothing.  It is just laughable for anyone to call this budget “tough”.


Let’s look at some specific points.
Continued, Deliberate, Over-spending
The most useful place to start is with the Conservative record of deficit spending.  They have been unable to balance the books  - except by accident - for virtually their entire time in office. That phrasing suggests they wanted to balance the books.  Truth is, they had no such intention.  Loyola Sullivan told the province in 2005 they could expect deficits of $500 million annually for the foreseeable future. 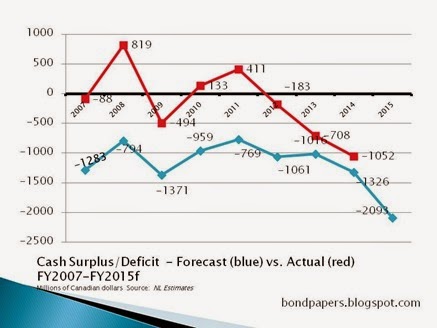 The table above shows the government’s budget performance since 2007.  The red line shows what actually happened.  The blue is what they forecast in the budget. The red is what actually happened.  These are not the numbers you are used to seeing.  That’s because the government reports the public finances in two ways.  Since 2007, the Conservatives have reported the budget speech on an accrual basis.  The Estimates – where the numbers in the table came from – shows the actual cash flow.

If you want to know how much the government actually borrows in any given year, you look at the Estimates.  As you can see from the table, the government planned deficits every since year since 2007.  The saving grace is that reality seldom delivered as they forecast.  Even in 2014,  the budget managed to deliver a cash deficit lower than the one forecast.

The deficit is the difference between the amount of income the government has in any year and the amount it spends.  The difference has to be made up by borrowing.  The government has borrowed every single year.  One of the great lies in the midst of the great many lies told about the annual budget under the Conservatives is the one that the Conservatives haven’t had to borrow money for quite some time.

The truth is that the Conservatives have borrowed every year they have had a deficit.  The difference after 2007 is that they had so much cash from a couple of windfalls due to oil that they didn’t have to go to the banks to get money.  They just dipped into the free cash and spent it freely. They will never, ever pay it back and the accounting practices of the House do not require them to show the assets they’ve spent as a debt due to be repaid.

Speaking of debt, the total public debt listed in the Estimates is now about $13 billion.  That is double what it was two years ago thanks to the cash borrowed to pay for Muskrat Falls.  Add in the $5.0 billion the Conservatives plan to add over the next couple of years and you will have a cash debt of about $18 billion before the decade is out.

That assumes that the government’s current projections come along exactly as forecast. The debt may well be higher if Muskrat Falls continues to experience cost over-runs and construction problems.
Just to put this in perspective for you, consider this.  When the Conservatives took office in 2003, the total public debt as presented in the Estimates was $8.007 billion.

The total debt represented by Muskrat Falls – to be paid entirely by provincial taxpayers – is $8.3 billion.

The provincial Conservatives claim to have reduced public debt.

The truth is that they have doubled the public debt they inherited in one single swoop.

Just for good measure they increased the amount of money owed by every Newfoundlander and Labradorians it by another two-thirds beyond that.

That doesn’t include the oil royalty windfall they spent after 2009 and will not repay.  The precise numbers are in the post from Wednesday.

Let’s take a look at some of the government’s revenue sources and how they changed compared to forecast in 2014.


There are the top three sources of government income.  They actually made more from personal income tax than expected.  Sales tax revenue came in almost bang on the estimate.  The biggest variation was in oil revenue.

That was last year.  The biggest drop in revenue in 2015 is forecast to come from oil.  It will be down by about $1.1 billion from the 2014 Estimate. The reason the forecast deficit is so large is that the government did not cut spending.even though they forecast oil revenues would be so far below the April 2014 forecast.